It is time again: In the next days the first alpine swifts should arrive in Freiburg.

When I walk through the streets and hear the calls of these birds, I realize that summer is just around the corner. All Central European Swift-species are migratory birds that are only here during summer.

In my opinion, they fascinate people because they live the dream of flying in the extreme: they spend their lifes in the air! They fly very fast with almost 100 km/h, they hunt insects in flight, they collect nesting material in flight, they drink while flying flat over a lake, they bath in the water by a short splash on the water surface, they sleep in the air and even the mating takes place in the air!

The only reason to land seems to be the raising of the brood. A recent accelerometer study found that some individuals of swifts spent the entire time in the air between the breeding seasons. The record is held by a bird that spent 314 days in the air without landing. These birds are so well adapted to their life in the air that they can not even take off if they land on the flat ground. The reason for this is that they have very short legs (they simply don’t need them). Normally you can’t see their feet either – but on hot days they sometimes keep their legs out of their plumage for cooling.

There several species of swifts in Europe with Common Swift beeing the most common.

The next similar species is the Pallid Swift, occuring in the mediterranean area (you have also seen the Pacific Swift in a former blogpost, which extremely rare reaches central Europe)

However in central Europe, just one more species is breeding: The Alpine Swift – the biggest of the species with a wingspan of about half a meter.

While the species used to breed only in rocks, it has now found alternative breeding sites in buildings.

The easiest way to discover a breeding site is to look for the excrement underneath.

Alpine swifts use narrow cracks to get into buildings.

Two years ago I was given the opportunity to join in ringing the young alpine swifts. The birds are ringed to see how the spread in Germany is progressing.

In 1955 there was the first brood of an alpine swift for Germany in Freiburg. The population has increased considerably and now there are more than 100 breeding pairs and the species has spread to Karlsruhe and Bavaria.

I look forward to meeting the birds in the next few days.

About one and a half years ago I thought about how I could photograph a Common Goldeneye (Bucephala clangula). This duck species is spread over the whole northern hemisphere, in Germany it only breeds in the north. But it also spends the winter in southern Germany. The males are coloured black and white, the females brown and grey – despite this lack of colour it is a very beautiful bird species. Two years ago I had the chance to photograph a female in Leipzig – but never a male.

Last winter I spent some time with a friend, M. Kamps, in northeast Germany – among other things we were hoping for beautiful observations of goldeneyes. In an industrial harbour I finally had a satisfying encounter.

Goldeneyes perform an extraordinary courtship display. The male swims towards the female – suddenly he leans his head wide on his back, holds it there for a moment and then several things happen at the same time: It throws its rear body up while it bends its tail down, pushes its feet quickly under the body till they are put into the air. The water splashes around, so that the male is framed by a ring of water. It finally gives a strange grunt. Then it turns its head with its beak open directly into the sky before returning to its typical swimming position. I hadn’t even dared to hope to photograph this behavior. But shortly after my return from northeast Germany, a Goldeneye male happened to doe the courtship display right in front of me. Here I show you some single pictures from a series of this behaviour:

Here another photo of the series showing the ring of water:

As you can see, the male does several things in sync, but this is understandably not so easy – not even for a goldeneye. Look at the following photo of a young male – while in the adult bird both feet are almost perfectly synchronized, in this young male the feet have completely different positions and the toes are not even spread. Water droplets fly through the air in a wild mess, but do not form a ring. So males are likely to have to practice this courtship behavior and females may be able to judge the male quality from their performance at the courtship display.

Hopefully, you enjoyed this series of photos.

After some very hot days here in February, we have to ask: is this winter already over? It would be a pity!

Here some photos from Switerland I took few weeks ago.

This spring, two friends and I visited one of the most remote Central Asian countries: Tajikistan. A country with breathtaking landscape, full of nice people and amazing animals. Life in this country with swamps, deserts and extremely high elevation areas is not easy. I will certainly tell and show more about this trip at some point. Here is already a first insight.

Another short trip – this time to France. I met a friend and college, Julien R., to record and discuss Crossbills. We visited different places in the French Alps. The days started long before sunrise and we hiked through the mountains during the early morning. Here are some impressions:

As we hoped, we found very interesting crossbills. When I show you the photos, they look like every other Red Crossbill. You need to hear the voice of these birds to be able to recognize them. As this is the topic of my PhD, it was really fascinating to meet some of these special birds of the southern Alps, which I heard on my computer many times but not in reality.

Now some more photos from the trip:

A new book is published, including many of my photos. It shows an incredible work of many birdwatchers, who counted waterbirds for 55 years. 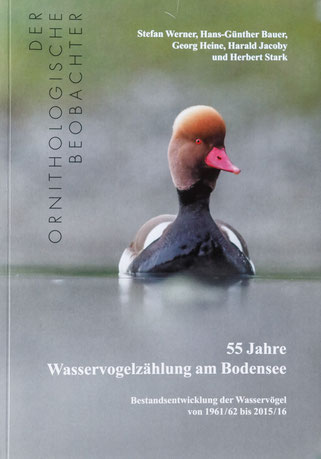 I just returned from a short trip with a friend to Switzerland. We wanted to watch and listen to the rut of the stags – and it was an amazing encounter. Here you can listen to the Red Deer you see below on the photo. Amazing sound, isn’t it? 😉

Rut of the stags in Switzerland

You can buy it here

Spring is arriving and I spent some time out there, with nice encounters. Here I share some from southwestern Germany.

Just spent a wonderful night in the Black Forest with a good friend.